As business owners, most of you are familiar with the typical top to bottom governance structure for a business: 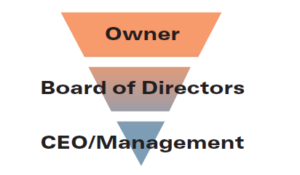 I would guess that most of you follow this structure in your business, just like the publicly-traded companies. But the difference between your dealership and a publicly-traded company is that most dealerships have exactly the same people in all three categories. This is a significant difference – if the same people fill all roles, you lose the potential benefits of the checks and balances involved in this business structure and a typical consequence is that the dealership’s board of directors is left with no real function. Instead, the owners make all key decisions and the management team implements them through their day-to-day jobs.

This model is gradually shifting as the pace of succession planning within dealerships continues to accelerate. Many of you have seen this play out with the hiring of a non-family member(s) in key management. But an overlooked change that can add a lot of value to the organization without dramatic day-to-day change or financial consequences is the use of one or more independent people to serve on your board of directors.

What is the Role of an Independent Director?

The first role of an Independent Director comes straight from the title – independent. Board members are always supposed to look out for the best interests of the dealership (vs. the owners or the employees). However, when board members are also owners and/or employees, it is incredibly difficult to expect them to check these other interests at the door. As a result, the easiest way to help the board focus on its duty to look after the dealership is to bring in an Independent Director that is NOT family, NOT an employee and NOT a key customer/supplier.

The second role of an Independent Director is to help the entire board focus and execute on the traditional board of director functions. These include the following:

When is the Right Time to Consider an Independent Director?

As long as you think an Independent Director can add value, there is no “right time.” But these types of decisions are typically made as part of succession-planning events like the following:

These types of situations are often trigger points for change in dealerships due to the closely held nature of the ownership groups involved. In these situations, Independent Directors often serve an important role as a buffer between generations to help take the “family” out of “family business decisions” and perhaps reduce stress on management that is not part of the family. Independent Directors help fulfill a similar role as a tiebreaker, reality check, or “us vs. them” buffer that can be important in helping multiple family groups come together successfully as part of a merger.

There are no set rules when it comes to adding Independent Directors to your dealership, but here are a few common topics that often come up when giving it consideration:

Adding an Independent Director into your dealership’s organizational structure is something that should be thoughtfully planned, but it is one of the lowest-cost and least disruptive changes that can be made from an organizational standpoint. As a result, it is a step that most dealers should consider as they look toward maximizing long-term value in their organization.

Lance Formwalt is the leader of the Equipment Dealer Group at Seigfreid Bingham, P.C. The firm serves as legal counsel to Western Equipment Dealers Association and many individual equipment dealers and Lance also serves as an Independent Director for some equipment dealers. Lance may be contacted at lancef@sb-kc.com or 816-265-4106. Also see www.sb-kc.com. This article is intended to provide general recommendations and is not intended to be legal advice. You should always consult your attorney for advice unique to you and your business.