The Western Equipment Dealers Association (WEDA) today launched an awareness campaign to highlight the risks of chipping. The campaign theme asks, “Who pays the bill for chipped equipment?”, and is communicated through a brochure, poster, other in-dealership materials, and social media.

According to WEDA CEO John Schmeiser, equipment dealers have grown increasingly concerned about the chipping trend in recent years.

“The idea is to alter the operating software for a piece of farm equipment, to run it at higher horsepower, torque or groundspeed, or to modify emission controls,” says Schmeiser. “Equipment chipping can be done for far less than the price of buying higher-capacity equipment, so you can understand that an equipment owner would listen to that.” 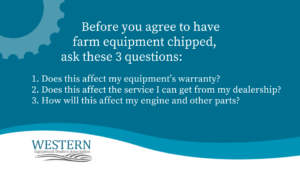 As WEDA’s chipping awareness campaign highlights, however, chipping creates at least three unwelcome consequences. First, equipment manufacturers will void the warranty if operating or emissions software is removed or modified. Second, if equipment is run at higher horsepower, temperature or groundspeed than it was designed for, it won’t last as long as it should. Finally, altering or removing DEF emissions systems is illegal in Canada and the U.S.

Schmeiser notes that many Canadian dealers have seen equipment come in for service with engine or drivetrain failures, problems they believe would not have occurred if that equipment was operated within engineered ranges. With the warranty gone, the farmer is left to pay the repair bill, which could be as high as $100,000.

“We also have serious concern about chipped equipment coming in on trade,” says Schmeiser. “If the equipment’s been run harder than it should be, the next owner could see performance problems or a shorter lifespan for that equipment than they paid for. And that’s just not fair.”

Whether it’s a lost warranty, chipping-related repair costs, compromised trade-in values or legal risk, the ultimate cost of chipping is borne by a farmer. It could be the equipment’s original owner or a farmer who buys that chipped equipment later, even a neighbor.

WEDA’s chipping awareness campaign encourages farmers to examine the risks before they have equipment chipped.

“We respect the fact that it’s their equipment and their decision,” says Schmeiser. “Our position is that, when you consider the risks of chipping, we just don’t think it’s worth it.”

For more information on chipping please contact the Western Equipment Dealers Association at (800) 661-2452.