The unknown face of the Western Farm Show retires 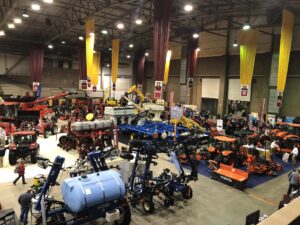 The major manufacturers showcase new equipment at the Western Farm Show. Other exhibitors include manufacturers of allied equipment, such as spreaders, cultivators, forage harvesters, planters, sprayers, grain carts, and other field-working equipment.

Not many visitors to the Western Farm Show will recognize the name Ken Dean and being unknown is fine with him. By the time this issue of Western Equipment Dealer is published, Dean will be enjoying retirement.

Dean ended his 10-year career with the Western Equipment Dealers Association at the end of June. As manager of the Western Farm Show, his retirement was the last stop in a long career of working in a remarkable industry where a lot people are unknown.

Most of us sit as tables and eat food produced by thousands of unknown people who are lumped in groups called farmers, ranchers or growers. These groups are supported by other groups, including equipment dealers, equipment manufacturers, food processors, truck drivers, even riverboat captains who navigate tricky rivers with barges full of grain and other agricultural supplies.

In simple terms, agriculture is made up of an endless list of unknown folks whose journeys include many steps to make sure we’re fed and clothed. 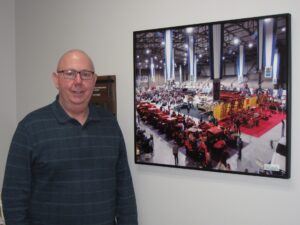 Ken Dean was born in Council Grove, Kansas. He spent most of his childhood in Harper, Kansas, where his parents owned and operated Gambles Hardware Store.

“Upon graduating from high school, I worked at radio stations in El Dorado, Garden City and Dodge City, Kansas,” said Dean. “While living in Dodge City, I joined the High Plains Journal, which is headquartered there, and worked for the journal for approximately 22 years during two 11-year stints, the first of which began in 1984.”

As for being a farm boy, Dean said he wasn’t born to the plow, but he clearly understands the nature of the work.

“Aside from spending 22 years with the High Plains Journal and another five years with Farm Press, my only experience in agriculture prior to that was driving a tractor and pulling a plow for three summers in Harper when I was in high school,” he recalled. “The tractor had no cab, no umbrella and an AM radio that only picked up two stations. You know, it was the good ol’ days.”

The steps of change

A big tractor is a big deal at the Western Farm Show, but so are grain handling systems.

Farm shows are as much a part of the agricultural landscape as rows of crops and pastures with grazing livestock. Casual observers may look at farms and believe they look the same year in and year out. But agriculture is constantly evolving and Dean said that’s also true of farm shows.

“The annual improvements in technology really standout,” he said.  “Companies that manufacture agricultural equipment are constantly improving their products, which enables row crop farmers to basically get more for less from each acre. We lose too much farmland on a daily basis as it is, so farmers have to get better at what they do with their existing land in order to be more efficient and profitable. Even a slight, subtle change in a planter, for example, can generate more yield.”

But farm shows, added Dean, aren’t limited to the array of new equipment heading for the market. “Today’s farm shows go well beyond just the manufacturers that exhibit. We see displays from all types of businesses that offer new products related to farming and ranching.” 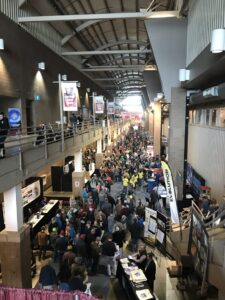 The American Royal in Kansas City, Missouri, hosts the Western Farm Show where tens of thousands of people visit the show.

Since the Western Farm Show is scheduled in February and well ahead of spring planting in the Midwest, farmers, ranchers and fruit and vegetable growers come to see what’s new and learn how the new products might be used in season ahead. “There’s nothing like seeing products in person,” said Dean, “and being able to talk face to face with the people who represent them.”

Dean agreed with that observation then and now. “There’s a little something for everyone at the show.” 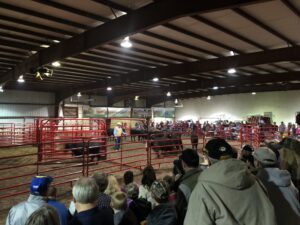 Whether you take a seed and grow a plant or build a straight fence on pastureland, the reward of working in agriculture is the sense of accomplishment that goes with it. Dean appreciates the accomplishments of the Western Farm Show.

“I’m glad we were able to join forces with MFA, Inc., then later with American Family Insurance, our long-standing major sponsors of our show,” he said. “The addition of the Low-Stress Livestock Handling demonstrations, put on by MFA, Inc. for 10 years running, has blossomed into a must-see highlight of the show.

“The growth of our dedicated Health & Safety Round-Up area has become a vital key to our show, providing many health screening opportunities to attendees, for example. Also, we’ve strengthened our relationships with the state FFA organizations in both Kansas and Missouri, and, with help from the American Royal Association, we continue to grow opportunities for the students who attend our show during our annual FFA Day. The youth of today are our leaders of tomorrow.”

Dean reflected on what he’ll miss about the industry, especially the Western Farm Show.

“What I found over my career is how down-to-earth most of our customers are, including exhibitors and attendees. If we treat our clientele with honesty and respect, they do so in kind,” he said.

“We appreciate everything farmers and ranchers do for the rest of us so we take pride in hopefully providing them an opportunity through our farm show to learn more about what’s available to them,” continued Dean. “We also know the farmers and ranchers greatly enjoy visiting with each other, and we know that many of them often only see each other once a year at the Western Farm Show. We also pride ourselves on being a family-friendly event and let the youngsters in free.”

Unfortunately, the Western Farm Show, which is produced by WEDA, was cancelled for 2021 because of health and safety concerns related to the pandemic. The 2021 show would have marked the 60th anniversary of this marquee event

“I was hoping to go out with bells and whistles instead of with only a whimper and no show,” said Dean. “I take solace, however, knowing that we were not alone in having to cancel our show… that COVID-19 impacted numerous events in 2020 and early 2021.  Still, I felt like my last show, February 2020, was a success and take pride in leaving on that good note.”

In announcing Dean’s retirement, WEDA CEO John Schmeiser said Dean has “done a wonderful job in growing the show to one of the largest events in the Midwest.

“We all should take a lot of pride in how the show has become a signature event of our association,” said Schmeiser. “This was accomplished through a lot of hard work by Ken’s team and his leadership. I know all of us will agree that when Ken talks about the Western Farm Show, his face lights up and you can see the passion that he has for the event.”