Bruce Coleman recently reflected on what he’s most proud of at Coleman Equipment. 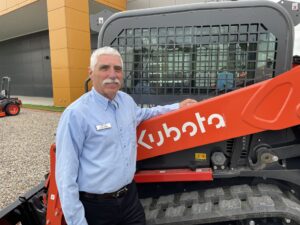 Bruce Coleman, his nephews – Chris and Jason Coleman – and his son – John Coleman own Coleman Equipment, with three locations in Kansas and Missouri. The dealership sells and services Kubota equipment with a focus on construction and rural lifestyle customers. In addition to Kubota, it sells and services products manufactured by Land Pride and Toro Siteworks. 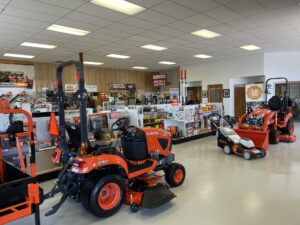 The showroom at Coleman Equipment’s Bonner Springs, Kansas, is clean, orderly and well-lighted.

The company’s roots began in 1940 when Bruce Coleman’s parents, Jim and Golden Coleman, established Coleman Coal and Feed. They sold animal feed to farmers and coal for heating to residents and businesses in Bonner Springs, Kansas. Jim Coleman had farmed and continued to do custom baling when he ran Coleman Coal and Feed. He decided to become a Minneapolis-Moline dealer because he respected the brand. In 1943 he became a dealer for Case equipment, having had good experiences with the Case baler.

Coleman sold the coal and feed business in the 1950s and began Coleman Implement Company to focus on agricultural equipment. In the mid-1950s, he left the Minneapolis-Moline brand and featured farm equipment shortlines, such as New Holland and Gehl.

Toward the end of the decade the Colemans were seeing the Kansas City area begin to burgeon, with a growing amount of farmland being sold for housing developments. Kansas City became one of the country’s largest cities area-wise – encompassing 318 square miles.

Also at this time, J.I. Case merged the American Tractor Company into Case. American Tractor had developed a backhoe that Case later combined with its 300 series tractor and a loader. That led to the first integrated loader backhoe in the United States.

The new equipment fit the bill for Coleman Implement, which was expanding into the construction equipment business. The business continued to grow through the 1960s along with the growth of Kansas City and its suburbs. 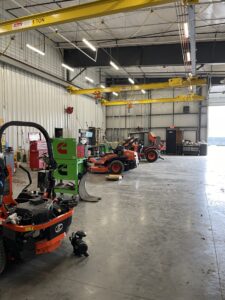 By 1986 Coleman Implement was the largest Case skid steer dealer in North America. Meanwhile, the dealership was focusing more on construction equipment, so the family renamed the business to Coleman Equipment Inc. in 1990.

Kubota developed a line of excavators in the 1990s, which Case didn’t have at the time, Coleman said. Kubota added zero-turn mowers, utility vehicles and skid steers. The Colemans saw that the Kubota business had outgrown the Case business.

“Kubota wanted us to have more of a presence in the Kansas City area,” Coleman said.

So, in 2013 the Colemans purchased O’Dell Tractor of Independence, Missouri, and Scott’s Tractor of Smithville, Missouri.

Del Coleman passed away in 2016 and the family was required to reapply for the Case contract. Bruce Coleman said that Case was looking for large dealership networks to represent its construction equipment.

He added, “Our future was limited for Case and it didn’t renew our contact.”

Coleman Equipment continued to sell Case parts, but discontinued that in 2019. With the help of Coleman’s nephew, Chris Coleman, the dealership launched an online business selling parts from different manufacturers. It was a big investment, but has proven to be a good one, Bruce Coleman said.

“Proven” is an operative word for the dealership’s focus on Kubota equipment.

“Kubota equipment is highly reliable,” he said. “The company talks to dealers and customers and is conscious about upgrading models… models that are proven.” 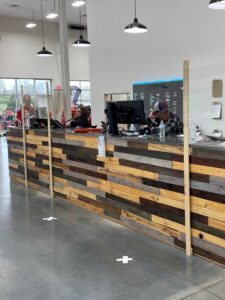 Coleman attributes the company’s longevity and success in large part to its employees. Many of the dealership’s technicians have been with Coleman Equipment for 10 to 15 years, and one employee who will be retiring soon has been with the dealership since 1976.

“We’ve done a good job of recruiting people who fit with our company culture,” he said. “It’s a culture of productivity.”

The dealership works for the right fit through multiple job-candidate interviews.

“When we bring someone on board, we stress they’re part of a team, that we appreciate them, and that management is approachable,” he said. “We provide a good benefits package, including a good 401K program. And we educate new employees about the benefits of that retirement program.”

Coleman also attributes the company’s longevity and success to customers.

“We value our customers,” he said. “We provide good product support and back it up with a good parts department. Internet sales have helped us be able to stock more parts.”

Attention to margins and cash flow allows the dealership to take appropriate care of problems, he said. 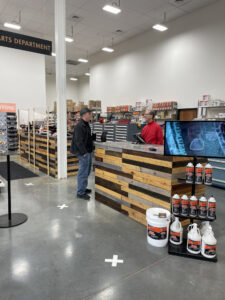 “Far too often dealers and manufacturers think mainly about market share,” he said. “And they don’t make money on their products. You need to ask for value.”

He credits his father for his focus on money management.

“He grew up in the Depression and said being in debt wasn’t good,” he said. “In the 1980s we survived when many other dealers didn’t because we didn’t have debt.”

As far as the future, he said he’d like to continue focusing on customer care and seeing each of the locations grow.

“With our employees and family doing a good job, its looks like they’ll carry it forward.”