Harold Chapman sees employees of the Baby Boomer generation and Gen Z at work … and smiles. “Those employees are the reason we’re successful,” says Chapman, general manager of Crown Power & Equipment, based in Columbia, Missouri. “It’s really great to see our veteran employees and young employees learning from each other.” Cultivating a good company culture is a key to success. “That
includes being open-minded and flexible,” he says. “I’m trying to learn from that.” 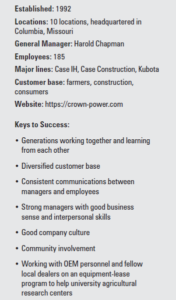 Seasoned employees bring to the table their experience while younger employees bring new ideas and technical savvy. Things don’t always go smoothly, but for the most part there’s a family atmosphere at each of Crown Power’s 10 stores in central Missouri, Chapman says. Th at’s saying something given that the Case IH, Case Construction and Kubota dealership has 185 employees.

From the time Crown Power was established in 1992 to today, Chapman has seen the dealership grow from 30 to 185 employees. As he talks about keeping employees safe during the COVID-19 pandemic as well as the future of the dealership, it’s clear they’re a priority.

Some of Crown Power’s employees are beginning to retire. Chapman is aware recruiting and preparing new employees is key to take the nearly 30-year-old company into the next 30 years. He’s proud to see how the company has grown from where it started in the 90’s to the scale of the organization it is today and see where it goes or grows in the future. “I’m excited about that,” he says.

But there’s also today to think about. COVID- 19 and its far-reaching effects on most every facet of life hit at the beginning of the busy season. Planting couldn’t – and didn’t – stop. Crown Power didn’t close any of its stores. Corporate employees who could telecommute were sent home, and store management limited access between departments. Th e company also implemented more stringent cleaning and sanitation procedures. “During this time our employees have been awesome, and our customers have been respectful during these weird times,” he says. 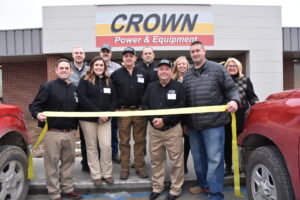 Crown Power has a large and diverse territory – about 275 miles from north to south and about 100 miles from east to west. About 60% of its business is in the agriculture market. Their market is diverse – full and part-time customers that support rowcrop operations, cattle farms, swine operations, poultry, dairy, vegetable farms, hay farms, along with numerous specialty operations. About 30% of the dealership’s business is in the construction market selling mainly to home builders, contractors, governmental entities and about 10% is in the consumer lawn and garden market.

Growth Has Been Steady 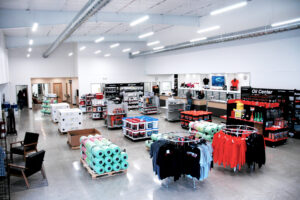 Crown Power has grown slowly and steadily since 1992. But 2019 was a particularly busy year. The company expanded from seven to 10 locations when it acquired facilities in Mount Sterling and Springfield and finished construction on a new store in Macon.

In every acquiring instance, dealers have come to Crown Power to sell, Chapman said. Some dealers wanted to retire and didn’t have family members or someone else who wanted to continue their businesses. However, the Macon area had not been served by a Case IH dealership for some time, Chapman said. This was an opportunity for a new store in a new territory. “So, we opened it from scratch,” he said.

Crown Power received approval from both Case IH and Kubota to operate a dealership in the Macon area. The building was an empty shell space with gravel floors. This gave the Crown Power team the opportunity to design it the way they wanted.

The design at the Macon facility, shown on the cover of this issue, features LED lighting, abundant glass for natural light, and a system for heating with waste oil.

Functioning As A Team 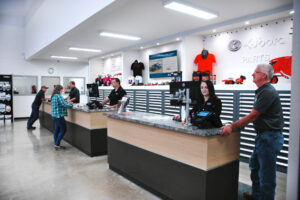 Managing that store and nine other locations requires good communications and extra training, Chapman said. “Sales, parts and service managers from our stores do a lot of the training,” he said. “I’m proud of the way they help each other.”

And when one store holds an event, such as a customer-appreciation day, managers from the other stores come to help. It’s not unusual to find them manning grills to feed crowds of hungry customers, Chapman says. The appreciation days are a busy season, and yet the managers make the time to support their peers, even if it means cooking in freezing temperatures, which has happened over the years.

Managing a successful multi-store network starts with the managers, he says. “Strong managers have good business sense and know how to work with people – training them well and saying ‘let’s go to work.’ ” While the stores may be spread across the state and all work for one company, each has its own flavor based on the communities they live in and the managers that lead their team. Each are working towards the same goal and care for their team members like family.

The little things, such as providing pancake breakfasts, barbecue or fish fries, also add up to make employees more comfortable with the company and each other. It creates camaraderie between the staff and allows departments to mingle and get to know one another.

Working with people in the community is another key to success. Crown Power greatly supports FFA chapters and 4-H clubs in its communities, it buys livestock at fairs to support youth. It also loans equipment to various charitable organizations in as many communities as they can.

One of Crown Power’s most unique community efforts is participating in a program developed by Pascale’s Pals, an organization that serves children and their families staying at the Children’s Hospital in Columbia, Missouri. Working spaces, benefiting Pascale’s Pals holds a “design duffle” contest in which businesses and others fill a duffle bag with items for children during their hospital stay. Crown Power designed a duffle with a farm and construction theme and filled with toys and related items. We like to support the communities we work and live in, says Chapman.

Harold Chapman’s contributions recently were recognized by the University of Missouri, where he earned in 1985 a bachelor’s degree in agricultural mechanization. He was named 2020 Alumnus of the Year by the University of Missouri’s College of Agriculture, Food and Natural Resources Alumni Association. “Harold Chapman was instrumental in helping design an equipment-lease program with Case IH that has transformed the University of Missouri Agricultural Experiment Station and its network of research centers across the state,” the college stated. John Poehlmann, now-retired assistant director at the college, said, “The significance of Harold’s work is extensive. College classes use some of the equipment for real-life field calculations. Research scientists now have modern farm equipment available that complements their research needs on the road to discovery. “It has taken a team to make this work. It includes dealers,
farm superintendents, university accounting, professors, and ultimately, the buyers of the equipment. Harold Chapman is the coach who makes it successful.” Harold noted that he appreciated John’s words, but that Case IH personnel, and fellow local Case IH dealers helped make this program what it is together as a team.