Calling a golfer a hacker is not the most flattering of terms, but it’s offered here with affection and appreciation to the more than 70 hackers who participated in WEDA’s Summer Golf Classic. 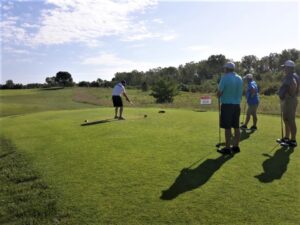 This group of golfers tees off from a hole sponsored by Tax Favored Benefits.

To help you think of something other than being cold, here’s a summer rewind of an association golf outing held at Falcon Lakes Golf Club in Basehor, Kansas. The event was a fundraiser for the Western Equipment Dealers Foundation, which supports the Agricultural Technician Program at OSUIT and provides scholarship funds to students enrolled in agricultural studies.

Jennifer Orr, WEDA’s member services manager, said an early morning start to the event allowed participants to finish their rounds and get inside before the searing heat of last August took hold. Once inside, golfers were treated to lunch, and prizes were presented to the top teams and individual performers. 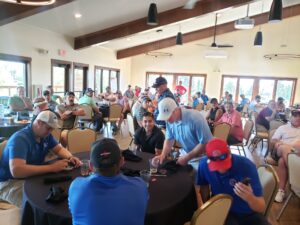 The post-tournament cooldown included lunch and prizes for winning teams and individual performers.

“We raised more than $17,000 for the Western Equipment Dealers Foundation at Falcon Lakes,” said Orr. “We also had the support of some amazing sponsors.”

One sponsor, West Texas National Bank, was unable to fill out all of its teams. At the lender’s request, Orr was asked to invite local first responders… and they responded to this act of generosity. 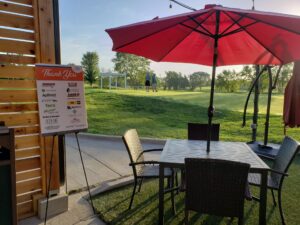 The “amazing sponsors” of WEDA’s Summer Golf Classic greeted golfers all over the course. It sure does look warm and inviting.

Here is a list of the winners and their sponsors. 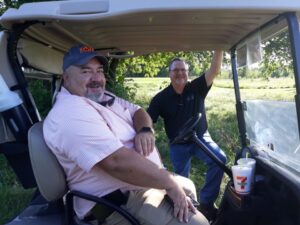 David Coon (seated) and David Martin, both with OSUIT, park their cart to take a break from helping WEDA event organizers.

The Western Equipment Dealers Association is also grateful to the volunteers who made the golf outing run smoothly. Greg and Loretta Russell of A.C. Printing manned the big hole-in-one hole. Danny Coon and David Martin of OSUIT were also on hand to coordinate the Bubba Watson fun hole.

The golfers… and their winnings

Before heading to the winner’s circle, golfers had to hack their way from one hole to the next. 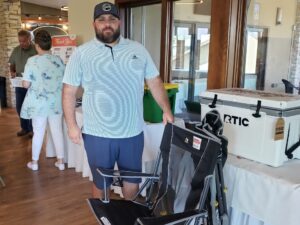 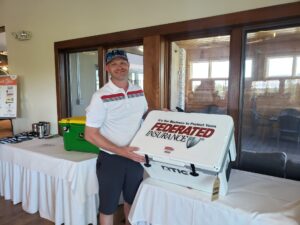 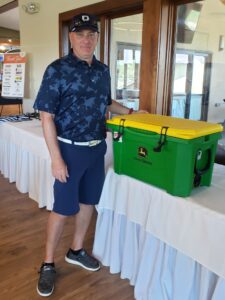 On a hot day, a cooler full of something refreshing is all a golfer needs. First responder Brian Taylor, a captain with KCKFD Station 19, is standing with a new best friend, a cooler provided by John Deere.