During recent on-site and virtual meetings of WEDA members, John Schmeiser outlined what he called “the way forward,” a unification plan of dealer associations that originally surfaced in 2018.

While much of the world has been sealed off by nearly two years of COVID-19 setbacks, Schmeiser said virtual discussions about unification continued and a plan was developed. With the easing of pandemic restrictions, Schmeiser took to the road to meet with members of the Western Equipment Dealers Association and St. Louis, Missouri, was the first stop.

Depending on the outcome of the voting, which ends February 28, EDA and other associations could become NAEDA once again. But this unification is not about a name change, although that was the first recommendation from dealers of the unification group. This unification is about doing what’s in the best interest of dealers and the industry, noted Tom Rosztoczy, Stotz Equipment and former chairman of the EDA board.

“Look at our changing dealer network, the changing demands and needs of dealers, make sense of the future and gear the organization towards it.”

While that quote would appear to be about a single organization, it’s a much, much broader thought that resulted in conversations to unify the four associations at the table, which operate under similar missions and structures and, in many cases, offer duplicate programs.

When Schmeiser became an executive with the former Canada West Equipment Dealers Association in 1996, there were nearly 30 dealer associations in the U.S. and Canada and, at one time, there were close to 60 with some states having more than one association.

Although the number of associations has been reduced through other mergers, equipment industry consolidation has been occurring for years and it’s changed the landscape for dealers and their customers. As Schmeiser pointed out during the meeting, one of the major topics during unification meetings was whether associations were keeping pace with industry changes.

The group of association executives and their boards thought improvements were needed and 43 recommendations were made to address restructuring. This included developing a long-range strategic plan for growth, governance, operations, transition, and staff in two association offices, Kansas City, Missouri, and Calgary, Alberta.

The financial savings alone are substantial under association unification.

While streamlining operations to save money is a noteworthy outcome, the primary benefit of unification would be meeting the business and operational needs of the agricultural, construction and outdoor power equipment dealers that would become the members of NAEDA.

As shown here, the national association will continue to concentrate on key priority areas, priorities that have been at the center of dealer associations for decades.

In addition to serving dealers throughout Canada, WEDA (the teal blue states) currently serves members in nine states as shown on Map 1.

Map 2 shows the post-merger service area that will operate as NAEDA. 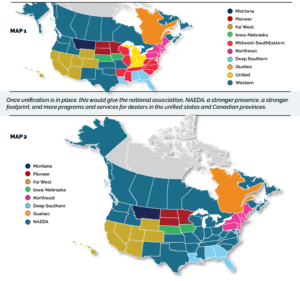 “Once unification is in place, this would give the national association, NAEDA, a stronger presence, a stronger footprint, and more programs and services for dealers in the unified states and Canadian provinces,” said Schmeiser.

Under unification, NAEDA would cover 24 states, nine Canadian provinces and have a membership of approximately 3,000.

Tom Nobbe, a John Deere dealer from Waterloo, Illinois, strongly supports unification. As a former president of the old NAEDA, Nobbe knows a thing or two about mergers. He was a member former Mississippi Valley Equipment Association, which merged with WEDA 10 years ago. Plus, his dealership, Wm. Nobbe & Co., merged with Sydenstricker Implement, Mexico, Missouri, three years ago to form Sydenstricker-Nobbe Partners.

Nobbe strongly supports unification of the association. When Nobbe became chairman of the board of the old NAEDA in 2013, he spoke with a lot of dealers and association boards about the priorities of dealer associations. He said what he heard loud and clear was a need for strong legislative representation at the national level and manufacturer relations.

“Both of those require one strong voice,” said Nobbe, “and this unification will give us that one voice and it will be stronger. For that reason alone, I think this is a really good move.”

Added Schmeiser, “We have dealers throughout North America consolidating and it’s a trend that isn’t likely to slow down in the future. You could make the argument that dealer associations haven’t kept pace with dealer consolidation, and the risk that comes with that is that large dealerships may not view the association as relevant.”

Schmeiser also pointed out that dealers – the leaders – who represented the associations in 2018 opened the door and were the driving forces behind this unification effort. He said they all agreed that in the best interest of dealers a stronger national association was needed.

“This resulted in a series of meetings where we asked ourselves, ‘What do we need to do, how do we do this and how do we structure this?’ Once we had a plan, it was presented to the boards of the regional associations that wanted to participate and the members of those associations, including WEDA members, are voting on the same plan.”

“Each of the three other regional associations has already gone through a merger,” said Schmeiser, “and although consolidation represents change, the key is to continue to provide the same focused services to dealers.”

When asked whether there was a strategy for outdoor power equipment dealers, Schmeiser quickly said, “Yes. Services for OPE dealers will be enhanced as additional resources will be dedicated to this sector. NAEDA sees incredible growth opportunities for OPE members and resources will be put in place to grow OPE membership.”

“Absolutely,” said Schmeiser. “NAEDA wants the current working relationship with regional associations to continue. As an industry, we are stronger by working together.

“Regional associations that pay dues on behalf of their dealer members would continue to receive the federal level legislative services and manufacturer relations support offered by NAEDA. There will also be an opportunity for a regional association to elect a board member to the NAEDA board.”

Similar to the St. Louis meeting, WEDA conducted 15 other area meetings, plus three webinars, for dealers in its three regions. The purpose was to expose as many dealers as possible to the unification plan. An information packet and ballots were distributed prior to the vote.

“We were excited to share the details of this unification project with our dealer members,” said Schmeiser. “We received an incredible amount of support from the members and they quickly saw how the plan benefits their dealerships.”

In closing, Schmeiser said upon approval of the unification plan, the transition would begin and the new organization would be operational by July 1, 2022. “It’s the way forward.”

The unified associations at a glance

The merged association will have a tremendous amount of experience in association leadership and a strong lineup of service providers.