The Balance of Power has shifted in sales

Buyers have the edge but sellers can level up 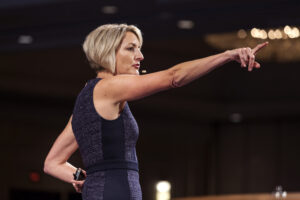 That’s where Colleen Francis comes into play. She is president and founder of Engage Selling Solutions, Ottawa, Ontario. As a sales strategist, Francis works with equipment dealerships to help those involved in the sales process understand that while some things in sales have changed many things have basically stayed the same.

“Over the last five years, the balance of power has shifted from the seller to the buyer,” says Francis. “Depending on what you want to call it, the Internet age has given so much power to the buyers because they have access to so much more information that they can use to inform themselves and drive the buying conversation.”

And that wealth of information in the hands of buyers has caused some sellers to backpedal because they’re constantly having to either reeducate themselves or reframe the conversation in order to move it through the sales process.

But, says Francis, being informed can be both positive and negative. “That well-educated, well-informed buyer has positive sides because we see more people walking into dealerships knowing exactly what they want.”

But on the negative side, adds Francis, all that knowledge may not benefit the buyer if they simply don’t want to speak to a salesperson or can’t sort through what is fact and what may be misleading. She says considerable research has been conducted that suggests the information age has provided both benefit and detriment to the sales process.

While the sales process may have changed in years, the one thing that hasn’t changed is how important people are to the buying process, especially in agriculture. “We always say people buy from people and that’s so true. The challenge now is it’s not just that face-to-face interaction that we used to have, where someone comes into a dealership, meets the salesperson, talks, builds a relationship, and buys.”

She says that people now involved in the buying process use what they might learn about a dealership through online videos and reviews, which may include comments from neighbors, friends, family or even strangers. In other words, there are quite a few people beyond the buyer who might influence equipment sales, and many of them you might not even know.

What is overlooked in the selling process?

However, Francis maintains the most overlooked tactical piece in the sales process and closing more business is the lack of follow-up. “I’m working with dealerships right now where people come into the store and they ask for quotes on new equipment or they ask for quotes on used equipment. They walk in and say, ‘Hey, how much is that out there?’ or ‘Tell me about this tractor, what year is it?’ and so on. These are clear buying signals.

“The seller gives them the information,” continues Francis, “and the guy walks out the door and they never follow-up with them. We know the world is owned by people who follow-up. Collecting that data and being able to call and setup a follow-up plan is what’s going to get that equipment sold. In one dealership, we counted $2 million in quotes presented and not followed up on. At a minimum, that’s $600,000 in sales lost. Forever.”

Sales is not the end-all metric of success

There are a number of key metrics that define sales success, says Francis, and it’s not always total sales. She says a salesperson can sell $6 million in equipment every year because they may be in a mature market with great brand recognition and customers just call.

But metrics other than just total sales need to be considered. Did the sales deliver expected profit margins or was equipment heavily discounted just to move it out the door? Francis also looks at leading indicators – or growth metrics – to determine what percentage of sales is from new business, existing customers, and whether the sales resulted in a bump in market share.

Francis also warns against ignoring customer satisfaction as a metric. “It’s important to know if customers are generally satisfied with a salesperson and the dealership because that can be an indication of overall relationship health in the marketplace.”

Even the most seasoned and successful salesperson can find ways to ignite a little tension or create drama in dealerships, especially when directives from sales managers push a hot button or two. Francis says in a perfect world “sales managers don’t sell; they don’t have their own customers.”

“This is really key to a functioning sales organization,” adds Francis, “because when sales managers sell their own customers two things happen. One, they’re not spending time building the team. Two, they’re creating animosity inside the team where the sellers think, ‘Well, of course, he’s doing well. He’s taking all the customers.’ In turn, sales staff see the sales manager as a competitor and not a leader.”

Francis says a good example of someone being a top-notch leader is Bill Belichick, coach of the New England Patriots. She says Belichick isn’t known for his ability to play the game he coaches – football – but he is known as a leader who has shaped the culture of an organization whose teams have won more championships than any other team in the history of professional football.

“If the sales manager is managing properly, they’re having one-on-one coaching sessions and weekly sales meetings. And in those weekly sales meetings, they’re building rapport and teamwork,” says Francis. “They sharing leads. They’re sharing ideas. They’re brainstorming on how to close deals. They’re sharing wins, which everyone can learn from, and they’re building that culture of success. But you can only do that if the focus is on full-time sales management.”

Western Equipment Dealer spoke with Colleen Francis for nearly an hour. She will be a featured speaker at the association’s North American Dealer Conference at the Westin Kierland Resort in Scottsdale, Arizona, Nov. 19-21 [2019]. Whether she’s ever sold a piece of equipment isn’t relevant. What is relevant is she understands what it takes to make the sales process successful and how to shift the balance of power from buyers back to the sellers.

Dealers who attend the association’s conference will walk away with sound information and guidelines to succeed in the marketplace and that includes dealing with failure in selling both new and used equipment. If you accept failure as the final outcome, you could be missing the big picture. “I say to my agricultural clients all the time, if you don’t win the sale you have to win the right to call on that customer next time,” notes Francis. She says this includes dissecting what went wrong and fixing whatever problems stand in the way of closing more sales.

Maybe it’s time for your dealership to level up and retake the lead in the selling process.

Editor’s note: Colleen Francis is an award-winning writer and consultant, bestselling author and member of the Speaking Hall of Fame. She is recognized as one of the foremost thought leaders on the future of selling by leading publications worldwide, including being named a LinkedIn Top Voice for Sales. To learn more about Engage Selling Solutions, visit www.engageselling.com.